Welcome to my CDF/Cal Fire Registry History Page. My name is Jerry   Glover , and this is a short Historical perspective of my time with the organization.  My Training, Assignments, Calls, Incidents and Adventures that I recall as vivid memories.   My co-workers and friends often called me Jerry .

All of my assignments were educational and very interesting.

While at the Ramona Warehouse the Fire Camp refrigeration was blocks of ice that we would form into a Igloo, which when the ice melted would cause a mud puddle. For the annual spring training fire camp I asked about using a mobile refer truck and was told to justify it well it work because we rented a refer truck for the annual spring training  and the San Diego Unit hasn’t went back to the Block Ice Igloos since

One of the stand out that I recall was when I was assigned to the River Flood in 1985 by Division Chief Tim Shay he wanted me to show the San Bernardino SO how ICS worked. After Tim had outlined what he wanted me to do he asked what equipment I wanted I asked if Fire Scope still had a computer he said yes so I requested it. Turned out to be the first time that the computer was used on a incident. 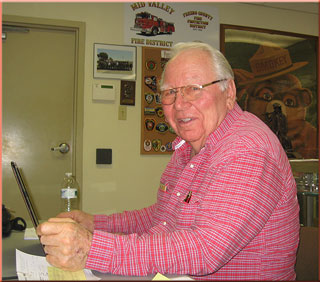